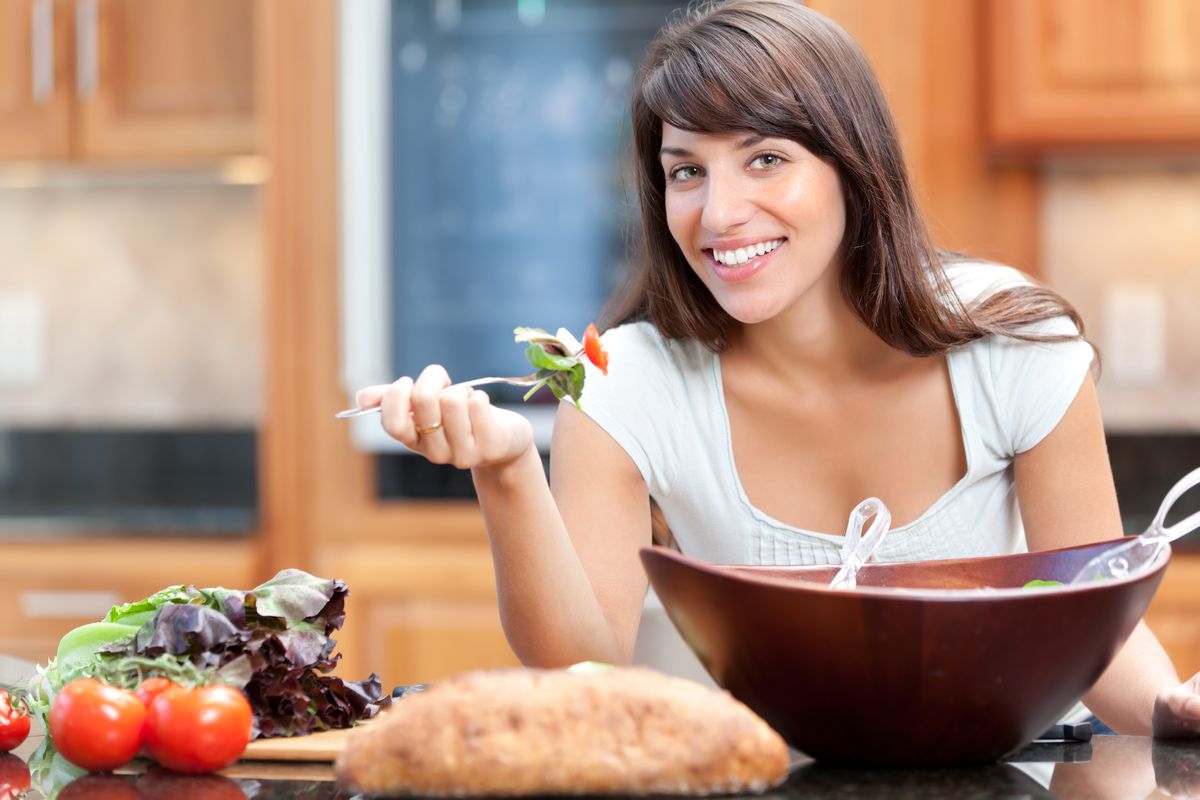 The Atlantic’s Megan Garber summed up the intrinsic quality of a stock photo like this: “To see a stock image is to know you’re seeing a stock image.” It’s a paradox. Stock photos are supposed to blend into the background like visual white noise. They capture the human condition at its most pleasantly benign: a world full of delighted women eating salads, patient tech support employees, and extremely conventional wedding ideas. Yet there is something about the carefully crafted anonymity of antiseptic stock composition that churns the collective uncanny. After all, nobody in real life ever looks that happy to be eating a salad. How does anyone capture the airtight nothingness required of a stock photo? How do you turn humans into vaguely human-shaped ideas?

Tony and Chelsea Northrup have seen exactly how the sausage gets made. Today, the couple work as professional photographers and host their own successful shutterbug YouTube channel. But eight years ago, they made some money by shooting and starring in their own stock photo venture.

This was at the dawn of the “microstock” era, marked by the rise of companies like iStock and Shutterstock, which took advantage of the internet to permanently liberate stock photography. For the first time ever, anyone with a camera could shoot royalty-free photos, upload them to microstock servers, and sell them for a few bucks to customers all over the world. With the Northrups’ photography experience, they converted their garage into a makeshift stock studio and learned the business on the fly.

Today, Chelsea and Tony regard their time shooting and modeling in stock photography as one of the most rewarding challenges of their careers. As sterilized as stock images need to be, they force a photographer to generate a scene that tells a basic story with as much clarity as possible. (Sometimes that story is about a job promotion, sometimes it’s erectile dysfunction.) As part-timers, the Northrups often found themselves scrounging together makeshift props in order to morph their garage into a sedate boardroom or a corner office. It turns out you can make a door look like a desk if you shoot it from the correct angle. Over the phone recently, they retold some of their favorite war stories from the stock business, like that time Tony found himself as one of the emasculated faces of French Cialis.

How did you find yourself in the stock photo business?

Tony: I’d been shooting some wildlife photography, and at the time I was able to make some money off that. I’d take pictures of lions, and people would find my website. But then Google Images came along and killed that entire business model. But microstock photography was starting to evolve and we were like, “Hey, we know how to take pictures; we understand how this works.” So that’s how we got into it, just out of our garage.

When you were getting your feet wet, how long did it take to pick up on the ins and outs of stock photos? Like, “Okay, we want to use these props and these poses.”

Chelsea: We shortly realized it wasn’t always about having the best photos. It was about having a story in picture form. We could have popular photos if we were hitting on something that was already going on in the media.

I remember once there were a lot of debates about medicating children, so I thought, “Okay, we can have our daughter posing with medication.” That’s a controversial topic that translates well to photo.

So you guys are literally paying attention to the news media, what images might be required for that, and capitalizing on that?

Tony: Yeah, there was a trend with some silly bracelets for 8-year-olds, so we jumped on that as soon as it hit, and sure enough, that picture sold really well. For the first few months, our stock photos didn’t get a lot of traction because we were going after easy stuff, like photos of job interviews. There were already a bunch of photos covering job interviews. So covering trendy or even ugly topics was [profitable] for us.

Chelsea: I really perfected the thumbs-up pose. If you’re a stock model, you’re giving a thumbs-up all the time. I don’t know if you understand how challenging that enthusiasm is.

What were some of the main poses you’d run through when you’re taking stock photos of, say, an argument or a doctor’s appointment?

Is that just maximizing the chance that one of those photos might be useful to someone? Is that the strategy?

Chelsea: It’s about storytelling. If we set up a shoot that’s supposed to look like a job interview, we don’t want to do one part of the story and then have to go back and shoot again so you can do the other part of the story. We’re trying to set up a situation where multiple stories can happen, and then you’re trying to show every possible story. When you put the photos on the stock site, then you have multiple versions people can buy.

How much money is there in stock photos? Were you guys doing well off that business?

Tony: It trickles in really slow. When I go back and account for a day of shooting and post-processing, over time we’d end up making $1,500, $2,000, for a couple days’ work. It could be a decent living as long as you could go a couple of years without actually gathering up the money.

When you guys wanted to put a prop in a photo shoot, were you on the hook for everything you were posing with? Did you have to go out and buy those bracelets?

Chelsea: Absolutely. In some of our business pictures it looks like we’re behind a desk, but it’s actually a door. It’s all smoke and mirrors. You’re shooting from different angles so it looks like you have a higher budget than you really do. That’s the fun of it for me. You’re hacking together a whole set and really believing that you’re in an office.

So it’s almost like MacGyver. “Okay, what do we have to make this work?”

Tony: Similar to the way we work around the props we have, you work around the models you have. Every stock photographer ends up using themselves as models. So, “Oh, Tony is a guy with gray hair, we’ll put him in a lab coat and now he’s a doctor.”

Where are some of the most memorable places you’ve seen yourselves pop up?

Chelsea: My favorite was when Tony was the face of French Cialis, because that was a joke I very carefully crafted and it came through for me.

Tony: My concept of the shot was just, “Oh, this couple is having a fight.” I’m posed in bed and Chelsea’s turned away, and we did 10 different variations on that. I’m mad at her, she’s mad at me. And in this photo, she decided to tag it in the tagging section as “erectile dysfunction.” It ended up as one of our top 10 photos.

Chelsea: [I went to a gym] and saw myself on the cover of a pamphlet [of the gym membership brochure]. But they didn’t believe me. I was like, “Oh, that’s me!” And they were like, “Oh, yeah, sure it is.”

Tony: I went to a Target and saw Chelsea on the cover of Yoga Magazine. I took a photo of it and put it on Facebook. And a bunch of people are saying, “Oh, man, can you teach me yoga?” And, like, Chelsea doesn’t know yoga. She literally just made up a pose. She stuck her arm out and said, “Is this something?”

You guys shot most of your stock stuff eight years ago. Do you still see yourselves pop up? Or has most of it filtered through the system?

Chelsea: No, we still see ourselves all the time. It’s a lot of really cheesy stuff. People send me packaging that I’m on, billboards in other countries. The only thing I ever regret is that I’m on the [packaging for] weight loss pills. I feel bad because people might think they actually work.

We think of stock photos as fairly sterile. But were you able to find any creative fulfillment in the industry? Maybe more artistically fulfilling than you expected?

Chelsea: I thought it was an excellent exercise for any photographer. Because first of all, in order to have your photos submitted, they have to meet a certain technical threshold. They’ll get rejected if they’re not up to snuff. Secondly, storytelling is a huge part of any successful photograph. And having to break it down to its simplest parts over and over again, I think it really strengthened me as a photographer. Even when I was being goofy, I found it really rewarding and challenging. I’d recommend any photographer trying it for that alone.

Tony: When people pay for your photos with dollars, that’s true validation. It’s not your friend giving you a like on Instagram. It’s someone saying that it was really meaningful and useful to them.