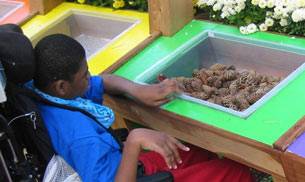 “The garden has been designed with a difference taking into account the needs of the special children,” Thane Mayor Meenakshi Shinde said.

In a bid to help kids with special needs, Thane (Mumbai) school has recently developed a unique sensory garden.

The idea behind coming up with this kind of a garden was to help stimulate the four major senses in these kids.

(Read: This 21-year-old Gujarat girl with only 20 per cent vision makes it to IIM-A)

On the occasion, Thane Mayor Meenakshi Shinde, who inaugurated the sensory garden at the Jidd Special School, in a recent PTI report said, “The garden has been designed with a difference taking into account the needs of the special children.”

Furthermore, the garden mainly focuses on developing the four senses:

Visual
Auditory
Olfactory (sense of smell)
Sense of touch – in a child
“It will help in stimulating the senses of a child. For example, there are sand pits, pathways made up of gravels, wooden flooring, flowing water set up and grass that simulate the senses,” Head Mistress Archana Shete said.

It took around six months to develop the special garden
The authorities are mulling to set up more such facilities in the city for special children
“The children in the school will be imparted training so as to bring them into the mainstream and the effort should be to make them self-reliant,” Thane Mayor added.