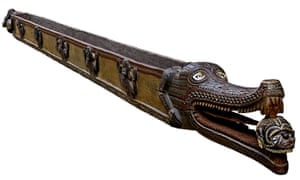 Historic objects from the South Pacific, some of which have remained undocumented and unseen in the stores of European museums for more than a century, are to be part of the UK’s first major show exploring Oceanic art.

The Royal Academy of Arts (RA) has announced details of its 2018 Oceania exhibition, which will bring together 250 objects from the vast region that stretches from New Guinea to Easter Island, and Hawaii to New Zealand.

The show will be staged in the 250th anniversary year of the RA, which was founded in 1768 – the same year Captain James Cook set out on his first Endeavour expedition.

Around three-quarters of the objects will come from European collections, in particular ethnographic museums in Germany and Switzerland, as well as museums in the UK, France, Ireland and Austria.

Adrian Locke, a senior curator at the RA, said: “There is an incredible array, a fantastic richness of objects that have been collected since the time of Cook, not just by voyagers and explorers but also by missionaries and anthropologists.”

Locke said some of the objects had not been seen in public and were undocumented.

One documented but previously unseen object from the British Museum is an enormous carved wooden feast bowl that has the head of a crocodile cheerfully holding a human skull in its teeth. From the Solomon Islands, it has variously been described as being used in both cannibalistic practice and marital ceremonies. “So take your pick on that one – perhaps both at the same time,” said Locke.

There will also be canoes, god figures, and drawings by the Polynesian navigator Tupaia, who travelled on the Endeavour.

Though the show arrives in Cook’s anniversary year, Locke said it would not be from a European perspective. All the art is by indigenous people and there would be no contested objects.

“We are very conscious of the sensitivity of a lot of these objects, some of which we can’t borrow for cultural reasons,” said Locke.

There have been cases of European museums giving back culturally sensitive artefacts to the communities from which they were taken, but Locke said he did not anticipate that being an issue in the RA show.

In one case the lender has stipulated that if a living descendant of an artwork’s maker comes forward, the RA must pay for them to travel to Londonfor the show.

It is the first show of its kind since 1979, when the National Gallery of Art in Washington DC explored the subject. Locke said the RA show, to be curated by academics from Cambridge and Auckland, would be “pioneering” and “reflect very much on the advancements that have been made in the understanding and the dialogue and the exchange culturally that has been taking place since the late 1970s”.

One contemporary art highlight will be a work which was, in some eyes, one of the star’s of this summer’s Venice Biennale: a gripping panoramic video work by New Zealand artist Lisa Reihana that charts the arrival of the British and its consequences.

Oceania will be the big autumn show in an important year for the RA. As well as its 250th birthday, the academy will mark the opening of a major redevelopmentto linkits buildings in London, Burlington House on Piccadilly and Burlington Gardens.

Other previously announced 2018 shows include one reuniting works once in the collection of Charles I and dispersed after his execution in 1649 and a history of the Summer Exhibition. There will also be shows devoted to the architect Renzo Piano; the drawings of Gustav Klimt and Egon Schiele; and one to life art that will include Jeremy Deller’s New York project where he invited artists to draw a naked Iggy Pop.

A lottery for 250 members of the public to take part in life classes, as artists not models, in the RA’s historic life room will also be held.