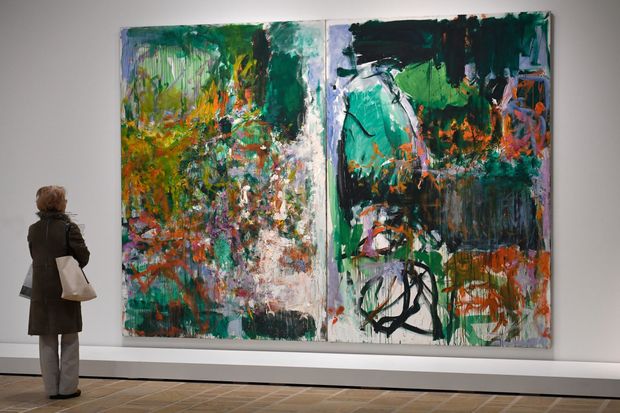 The All Art-Male index rose by only 8.3% in the same time frame. That’s a drastically different result than the previous 50 years, when repeat sales of both male and female artists moved roughly in tandem, says Michael Klein, head of Sotheby’s Mei Moses, a firm that tracks the art market through repeat auction sales of more than 63,000 objects.

In the past 50 years, “gender didn’t make a difference, but what we’re seeing in the past couple of years, is apparently it has,” Klein says. “It was fascinating to see the uptick on top of the fact that things have been the same for so long.”

Despite the acceleration in repeat sales of works by women, the proportion of works by female artists and male artists sold at auction hasn’t changed much over the last 10 years. Of global auction sales in 2018, art by women represented only 8% of total lots sold compared with a 6% share in 2008, according to The Art Market 2019, a report written by the Ireland-based firm Art Economics for Art Basel and UBS.

The report also points to a 2017 academic study that shows a gender discount of nearly 48% for paintings by female artists sold at auction.

Sotheby’s Mei Moses’s data-based analysis doesn’t reveal whether the uptick in repeat sales it tracks indicates collectors are now realizing art by women is undervalued, Klein says. But in the report, the firm said the analysis could indicate a market shift is underway, and it may become more evident in the next decade.

What’s clear is that art by men continues to dominate the market by far, with sales in the US$100 million range for blockbuster artists like Jean-Michel Basquiat, Claude Monet, or Francis Bacon, overpowering sales by women, which rarely even come close to the record US$44.4 million that Georgia O’Keeffe’s Jimson Weed/White Flower No. 1, 1932, achieved at a Sotheby’s auction in November 2014.

One reason works by female contemporary artists are doing so well is those by their male peers are getting scarcer, the firm said. As the supply of works by male Abstract Expressionists Jackson Pollock and Willem de Kooning has declined in recent years, for instance, dealers and auction houses “have begun to focus buyers’ attentions on the work of their more historically overlooked or undervalued contemporaries, notably Joan Mitchell and Helen Frankenthaler, ” the firm said in the report.

According to Sotheby’s Mei Moses, the rates of return on repeat sales of works by these female artists were higher than their male counterparts. The median compound annual return (CAR) for resales of works by Mitchell was 14.7% between 2014 and 2018; for Frankenthaler, it was 10.9%. Meanwhile, de Kooning’s median CAR for those years was 7.8%, while the return for resales of Pollock works was 6.5%.

The recontextualizing of certain artists from one genre to another also may have played a role in higher repeat sales, the firm added, noting that O’Keeffe’s works, for instance, have performed better as they’ve been sold in the more popular impressionist and modern, and even contemporary, categories instead of only as American art.

There are also outliers, like the Japanese artist Yayoi Kusama—who the report describes as “in a category of her own”—whose resale index has skyrocketed to nearly 27% median CAR between 2014 and 2018, the firm said.