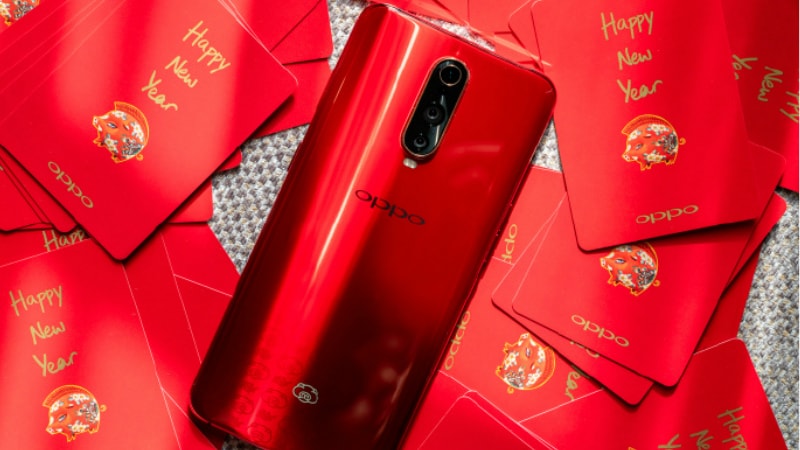 As expected, Oppo has now launched the Oppo R17 and Oppo R17 Pro ₹ 43,690 New Year’s Edition smartphones. Both the new devices see the same specifications as before, but have a new avatar with a logo of the piglet at the back. The New Year’s Edition brings along a festive glossy red colour smartphone with gradient effect, inside a gold and red decorated box. The devices also sport a new New Year themed UI as well. According to the Chinese calendar, the next year is considered to be the year of the pig and hence the piglet logo at the back. Furthermore, the red colour is said to symbolise the traditional paper-cutting art of the country.

As mentioned, specifications of both the devices remain the same. The dual-SIM (Nano) Oppo R17 Pro New Year’s Edition runs Colour OS 5.2, based on Android 8.1 Oreo. It sports a 6.4-inch full-HD+ (1080×2340 pixels) AMOLED display with a waterdrop-style notch, Corning Gorilla Glass 6, and a 91.5 percent screen-to-body ratio. It is powered by an octa-core Qualcomm Snapdragon 710 SoC, coupled with 8GB of RAM. There is 128GB of inbuilt storage on the Oppo R17 Pro New Year’s Edition, expandable via a hybrid microSD card (up to 256GB).

The Oppo R17 Pro New Year’s Edition bears a triple rear camera setup, with a 12-megapixel sensor featuring a variable aperture from f/1.5 to f/2.4 and a 1.4-micron pixel size, a 20-megapixel sensor with an f/2.6 aperture, and a third lens that is a TOF 3D stereo camera that assists in depth effects amongst other things. The rear camera setup features optical image stabilisation, Dual Pixel PDAF, and the company is also touting an Ultra Night Mode that uses AI-based algorithms to optimise low-light photography. On the front, the Oppo R17 Pro New Year’s Edition bears a 25-megapixel camera with an f/2.0 aperture, as well AI Beauty Camera beautification with a live preview option. The beautification mode is said to learn preferences from the user to provide better results.

The Oppo R17 New Year’s Edition, on the other hand, is powered by the Snapdragon 670 processor, packs up to 8GB RAM and 128GB internal storage, a dual camera setup – a 16-megapixel and a 5-megapixel sensor, a 3,500mAh battery, Bluetooth v4.2, and a Micro USB port. Other specifications match the Oppo R17 Pro.