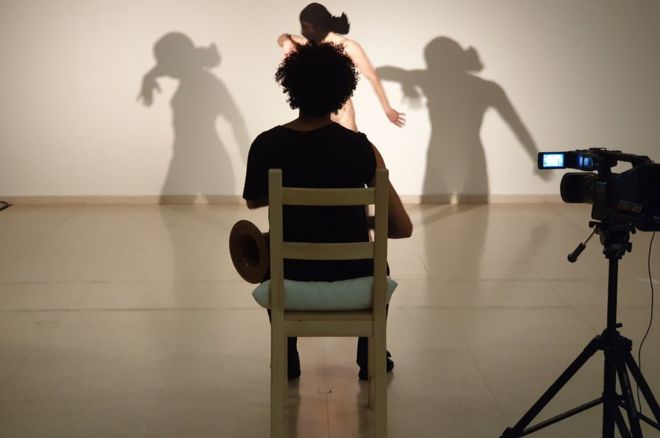 “The fact that I do performances nude, in Belgrade and Serbia, means a lot for somebody who is queer and whose body is queer,” he says.

Aleks Zain is putting his own twist on a performance piece originally created by Serbia’s most famous artist, Marina Abramovic.

Belgrade is where the world’s self-styled “grandmother of performance art” created her first pieces in the 1960s and 1970s and this retrospective, The Cleaner, has toured the world before finally coming home.

Zain is performing one of her early works, Freeing The Body, in Belgrade’s Museum of Contemporary Art.

The performer is naked apart from a tightly wrapped scarf covering the head. They dance in front of a stark, white background as an indefatigable drummer beats out an unending rhythm on a djembe. The performance continues until the dancer falls to the ground, exhausted.

As a transgender man in a socially conservative country, Zain finds Freeing The Body both nerve-wracking and liberating.

“Freeing The Body is heavy for me – because I’m naked and you will have to see a queer, naked body for a lot of hours. But seeing it here in a museum is different to seeing it in the street or in a medical book.” 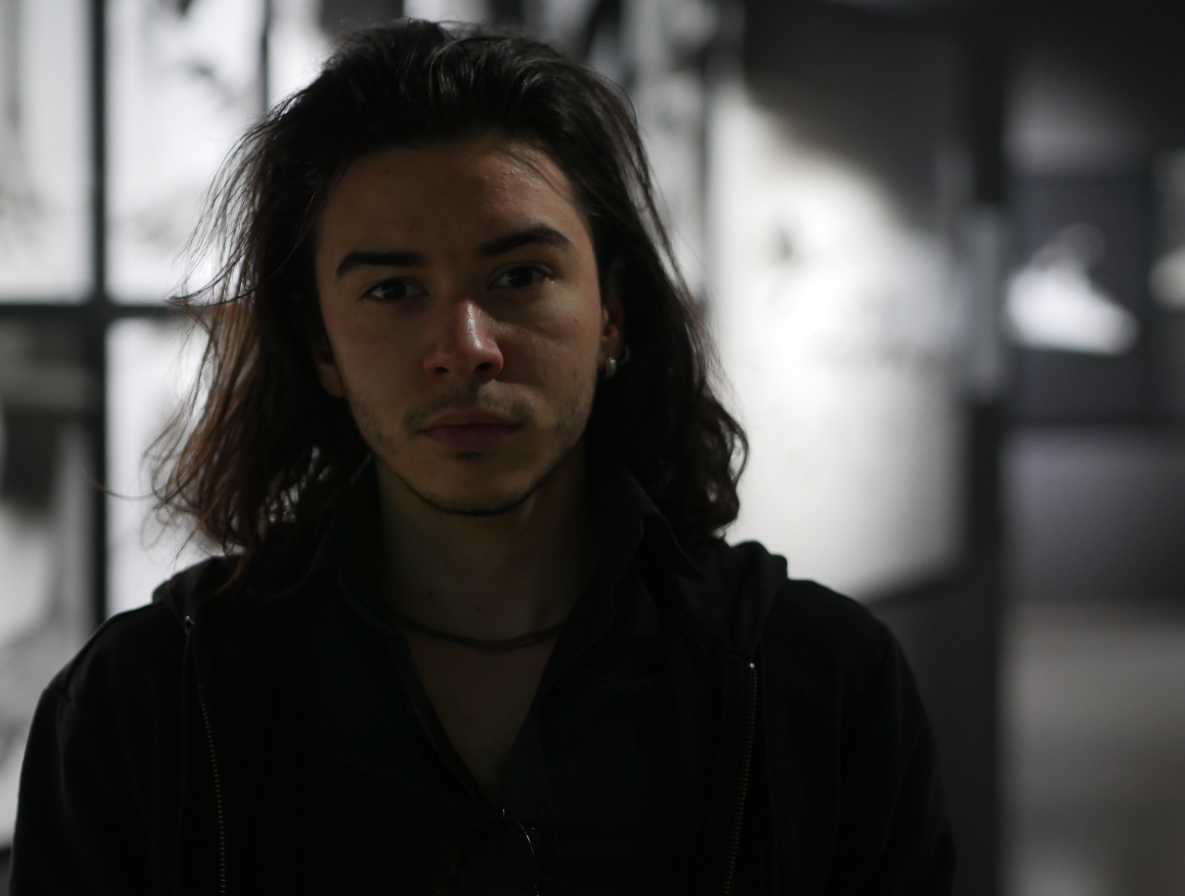 This is a way to approach people – you see different bodies; all these bodies are equal. That gives me a reason to do it

Some are experienced performance artists. Others have little or no background in a discipline that places considerable demands on both mind and body. All of them studied the Abramovic Method with the artist’s regular collaborator, Lynsey Peisinger, before The Cleaner opened in Belgrade.

Andreja Kargacin is dressed in a white lab coat, ready to perform, as she cheerfully greets Aleks Zain in the museum’s foyer.

The 20-year-old theatre student is a published novelist, visual artist and dancer, but her real passion is performance art.

“This exhibition is my dream come true,” she says. “Marina is a big part of my life artistically. Because I’m from this place, she’s always been a real driving force for me.”

In a matter of minutes, Kargacin will remove her lab coat and take her place in a doorway, opposite another performer. To reach the exhibition space beyond, visitors must squeeze between them.

The catch is that the performers are completely naked – a piece that Abramovic titled Imponderabilia.

“I’ve walked through Imponderabilia a lot of times – and I have to say that walking through it is more uncomfortable than doing it,” says Kargacin.

“You feel people are very vulnerable and that you’re interrupting them in something.

“Whatever you do is an attack on that little space that’s happening between them. And that’s not how I feel when I’m performing. So I’m thinking the people who are walking through us are doing such a great job – it’s not easy.”

The reperformers work in a cacophonous environment, as shrieks and slaps reverberate around the giant screens displaying videos of the original Abramovic performances.

What sounds like conga drums turns out to be an audio recording of Rhythm 10, a piece involving 20 knives, two tape recorders and the artist’s left hand. The accompanying photographs vividly illustrate how Abramovic suffered for her art.

Ivana Ranisavljevic adds to the aural assault with her interpretation of Freeing The Voice.

Lying on her back on a mattress, her head hanging over the edge, she literally screams herself hoarse.

As a relative veteran of Belgrade’s performance art scene, she appreciates the attention that The Cleaner is bringing to her discipline.

“We still have an underground performance art scene. But there comes a point after a few years where you ask yourself why you’re doing this – when there are few people coming to see you. And most of them are your colleagues,” she says. 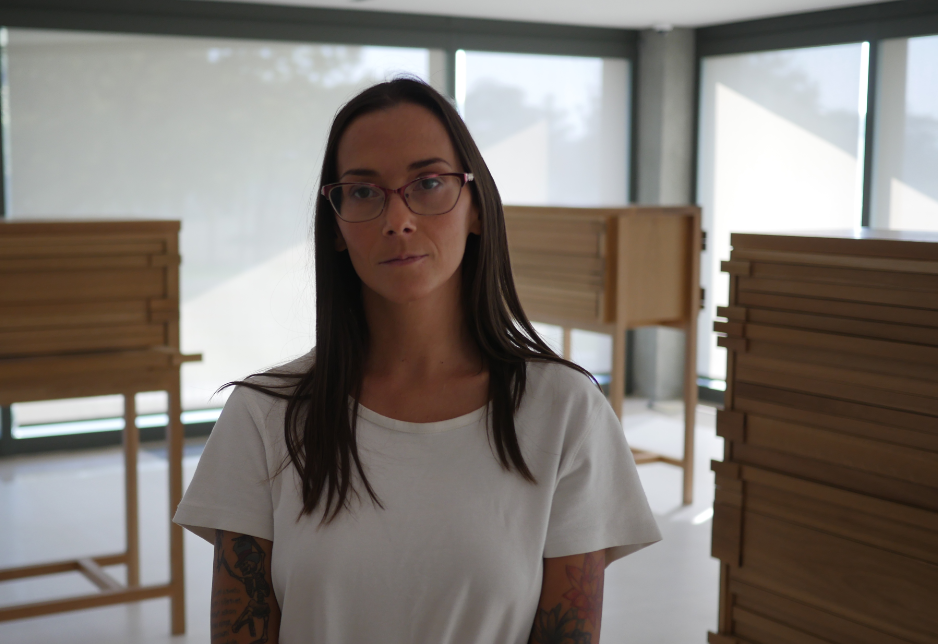 This is a big deal – you really feel appreciated and respected

Five and a half hours after he started his performance of Freeing The Body, Aleks Zain can dance no more. Time is also running out for The Cleaner, which ends its run this month.

Bringing the exhibition to Belgrade was a major coup for the Museum of Contemporary Art, which was closed for a decade before it reopened in 2017.

But Aleks Zain says it will take more than just a blockbuster show to revive an artistic scene that was damaged by decades of conflict and stasis.

“It’s very nice to have big artists in our national museum. But if we keep it on that level and don’t include our own scene then, practically, we have nothing.

“If the institutions decide they want to include our own artistic scene, especially the young scene, then perhaps we can see progress in 10 years.”

It sounds like a long time. But when you consider it took Marina Abramovic 44 years to return, a decade may seem like the blink of an eye.