Economic prosperity, combined with a substantial fall in the price of data connectivity since Reliance Jio was officially made public in 2016 has led to a scenario where the majority of India’s 1 billion + population currently has access to the internet and, therefore, consumes content on a daily basis.

The potential of such a scenario is tremendous, as sectors that rely on digital data now have an enormous, relatively untapped market to compete in, while nearly every other sector can leverage this substantial online space to expand the reach and scope of their products and services.

Some sectors that are directly reliant on the online space include the technology, media & telecommunications (TMT) segment, as well as the media & entertainment (M&E) sector. Predictions have been made far and wide about the future of these sectors in India, and the numbers are monumental.

While Big Four accounting and advisory firm Deloitte provides annual analysis of progress in the TMT sector, Big Four rival EY has been monitoring developments in the M&E sector. In 2017, the firm reported that the M&E sector would balloon to a value of nearly $35 billion by 2021.

The firm has now released its latest analysis of M&E in India, which reveals that the sector grew by a staggering 13.4% over the course of 2018, taking its current value up to nearly $24 billion. However, the rate has caused EY to revise its predictions for 2021, placing the value at just under $34 billion.

Up until 2021, the sector is expected to grow at a compound annual growth rate of 12%. EY zooms in to identify the segments that appear to be driving this growth, and the world of online gaming appears to be expanding at an unprecedented year, having grown by nearly 60% last year alone. 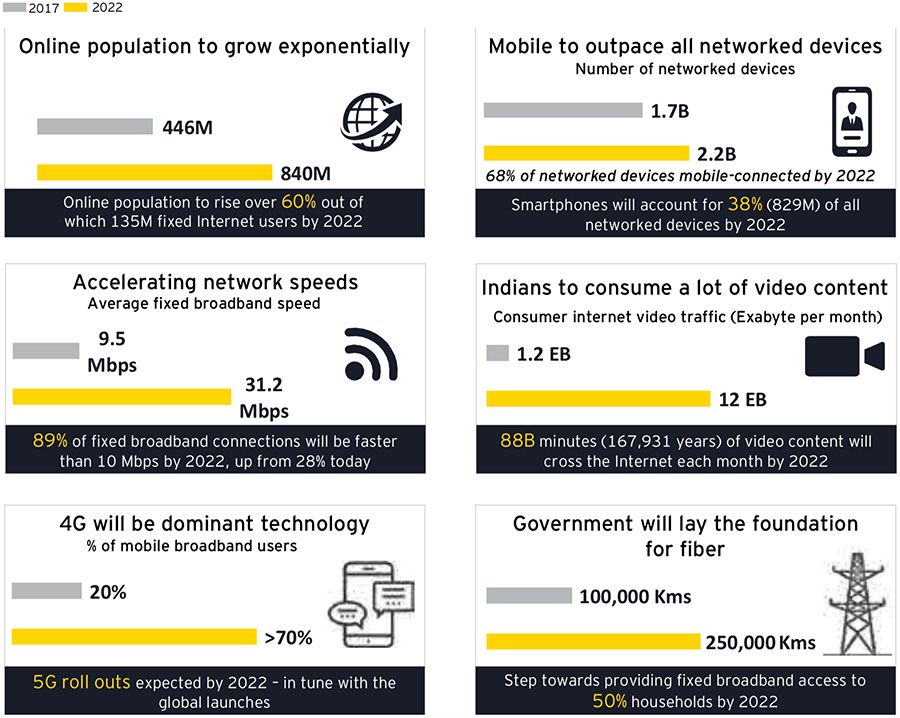 Perhaps due to the expansion in internet access, the number of online gamers in India currently stands at nearly 280 million, having grown by more than 50% last year. This growth includes casual gaming activity as well as activity on money gaming platforms such as fantasy and e-sports.

Another segment that is heavily reliant on the digital landscape is that of digital media, which grew by nearly 42% last year on the back of digital advertising. Reports have placed the estimated value of spending in India’s digital advertising domain at a staggering $295 billion in 2021.

Subscriptions was another area that contributed to growth in the M&E sector. EY reports that consumers and India are displaying an increasing propensity to pay monthly installments for their online content, which has also contributed to rapid expansion in india’s OTT market.

The Television sector, meanwhile, remained the largest segment and grew at a steady rate of just over 12% last year. TV has achieved a great degree of penetration in the country, given that nearly 70% of Indian households currently own televisions, although a number of these users consume content in regional languages.