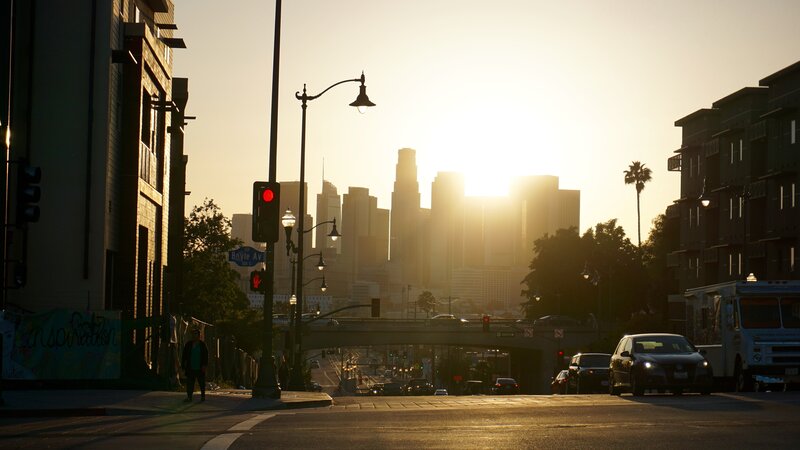 The view of downtown Los Angles from Boyle Heights. As more neighborhoods in L.A. gentrify and see rents rise, many residents in this largely working class Latino neighborhood fear their neighborhood could be next. Art galleries have become the focus of concern.

But step inside some of the old, soot-stained buildings and you’re in a world of high-end art, with paintings worth thousands of dollars on the walls. 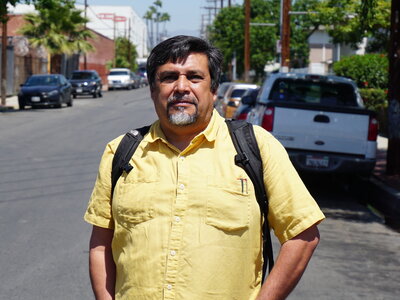 Leonardo Vilchis is executive director of Union de Vecinos, a Boyle Heights nonprofit that represents low-income residents. His group wants the art galleries out of the neighborhood.

Over the last couple of years about a dozen art galleries have moved to vacant industrial spaces on and around Anderson Street to escape escalating rents in other parts of the city. Their arrival in the largely Latino neighborhood has angered some residents and neighborhood activists. With about a third of its 90,000 residents living below the poverty line, they argue the community has more important needs than art galleries.

“A laundromat, a homeless shelter, affordable housing for people who make less than $20,000 a year, maybe get some parks, and some gardens, ” says Leonardo Vilchis, who is executive director of Union de Vecinos, a Boyle Heights nonprofit that represents low-income residents in the neighborhood.

Vilchis fears the art galleries on Anderson Street could represent just the first wave of gentrification in Boyle Heights, a wave that could force longtime residents out as other businesses arrive and rents rise in their wake. Some observers have dubbed this connection between art and gentrification “art washing.”

“Put in an art gallery with paintings that cost tens of thousands of thousands of dollars and the audience that comes to this place starts looking for other kinds of amenities,” says Vilchis. “They look for the brewery, for the coffee shop for the place to hang out. All of those things increase the cost and the value of the local neighborhood. “ 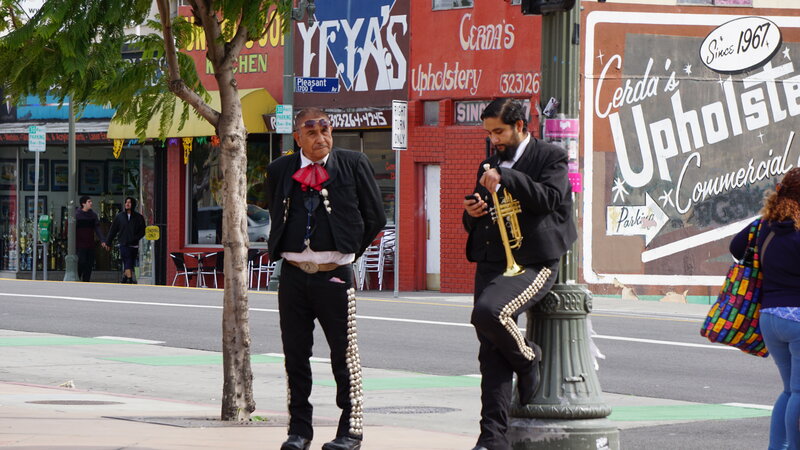 Boyle Heights residents fear gentrification will push out longtime residents of Boyle Heights and change the flavor of the community, like the musicians who gather in the neighborhood’s Mariachi Plaza looking for gigs.

Eva Chimento, of Chimento Contemporary, admits that before her gallery’s opening night she was pretty clueless about this part of Boyle Heights.

“You know like when you cross the state line there are empty fields that is like ‘No Man’s Land.’ It’s not Arizona, it’s not California it’s just ‘No Man’s Land.’ That’s where I thought I was,” Chimento says.

Boyle Heights is a community with a long history of protest dating back to the Chicano civil rights movement of the 1960s. And anti-gentrification activists are using some of that same energy in a campaign to force the galleries to leave Boyle Heights.

Their tactics include protests in front of the galleries and the posting of mock eviction notices on the businesses doors.

One group has even posted flyers showing a human skull in gun sights and the words “Boyle Heights is not safe for hipster trash.” 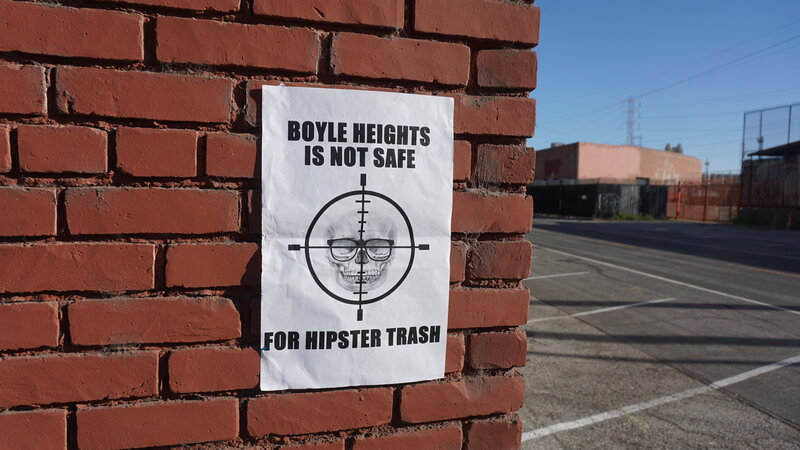 Protesters posted these flyers around the neighborhood.

Last year, the door of a gallery was graffiti tagged with the words “F*** White Art.” That prompted an ongoing hate crime investigation by the Los Angeles Police Department.

Vilchis doesn’t apologize for these actions, saying that they’re the only way Boyle Heights poor and working class residents can get attention.

He also likens the presence of galleries in the neighborhood to a kind of cancer and believes compromise is impossible, even with gallery owners who say they want to help the community.

“What you need to do with cancer is you’ve go to do surgery, right?” says Vilchis.”You need to start killing the cells that are creating the cancer. So to say ‘OK, I’m a cancer cell, but I want to be good,’ doesn’t change the fact that you’re a cancer cell. You need to move out.” 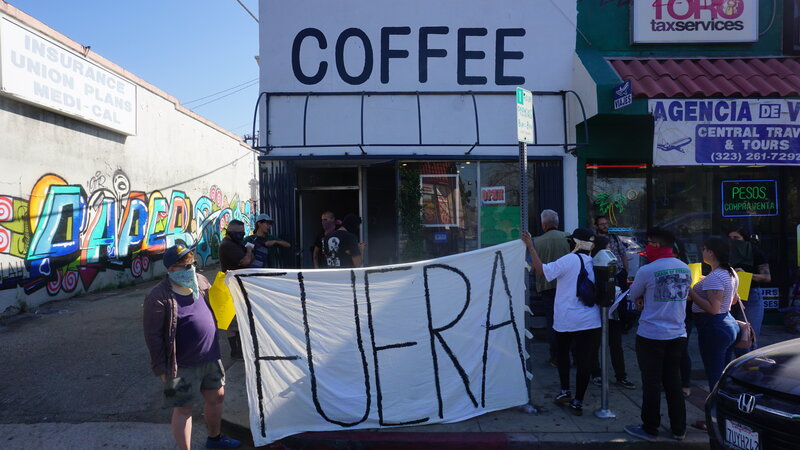