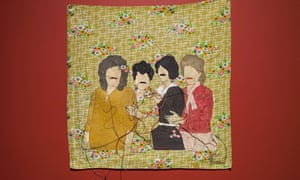 In recent years the Istanbul biennial has grappled with subjects such as the city’s anti-authoritarian protests in Gezi Park in 2013 and Europe’s migration crisis. In 2009 the biennial’s manifesto said “politically neutral art is a means of policing the art world”.

The 15th edition of Turkey’s most important contemporary art event, which opens on Saturday, is curated by the celebrated Scandinavian subversives Elmgreen and Dragset, and takes as its theme “what makes a good neighbour”.

However, despite Turkey’s increasingly tense relationship with Europe, Recep Tayyip Erdoğan’s wide-ranging crackdown in the wake of last year’s attempted coup, and his country’s role in the civil war in Syria, politically controversial art is almost entirely absent. Across its six venues, mention of the president, his AKP party or the tens of thousands of people detained since the coup attempt is noticeably muted.

Elmgreen and Dragset vigorously deny they have practised self-censorship. They acknowledge an absence of anti-government slogans or artwork incorporating overt activism, but say contemporary politics has infiltrated in more subtle ways, and that taken as a whole the biennial offers a more nuanced perspective on the country than that usually afforded in the international media.

“It’s a little flat if art gets reduced to being a direct response to very populist politics, and very simple answers on very complicated matters,” says Elmgreen. “I don’t like the situation in Turkey but I also don’t think the mindset ‘we have an issue, we better call some artists here and they can just respond to it like a jack-in-a-box’ is helpful either.

“These direct responses from art to many political situations often do very little good in the political arena. It can be good art but it’s often very bad politics.”

Dragset draws a distinction between the art world and geopolitics: “Art is not there to react the same way as politicians or the media, using the same simplified populist language,” he says.

It is also the case, he says, that the Turkish art scene is still looking for a language of resistance and a way of expressing opinions in an increasingly controlled society. “The voices are quieter at the moment and maybe this exhibition does reflect that,” he says.

Both artists say they have been sensitive to the political climate faced by Turkish artists.

“I get upset by that very Eurocentric, self-obsessed idea that the whole world should work the same way as us, because it’s just not the reality,” says Elmgreen. “We cannot be so arrogant that we disrespect artists working in the 75% of the world.”

Those works that do touch on subjects such as authoritarianism, resistance and the repression of women for the most part focus on other countries, and are by international artists.