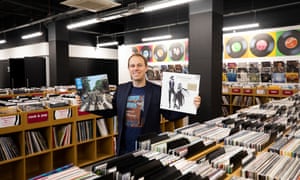 The biggest music and movies store in Europe opens on Friday as the new Canadian owner of HMV takes the first step in a bold expansion plan he hopes will defy slumping sales of CDs and DVDs.

The size of a supermarket and called HMV Vault, the Birmingham shop is stocking 80,000 CDs and 25,000 vinyl albums. It is a brave move at a time when traditional high-street retailers are closing in record numbers and in a business where online streaming has battered sales of physical entertainment products.

But it is a statement of intent by Doug Putman, the 35-year-old boss of Sunrise Records, which rescued 100 HMV stores from administration in February. He has pledged to invest at least £10m in reviving the chain and wants to make his shops part of local communities, work with charities and – in a sideswipe at Amazon – has promised to “pay our tax”.

UK sales of physical media, including CDs, DVDs and games, shrank by nearly 13% in the year to 25 August, according to market analysts Kantar. In video – mainly DVDs – sales plunged 28%.

HMV’s share of the market sank three percentage points to 14.4% in the three months to 30 June, compared with the same quarter in 2018. But HMV’s loss was Amazon’s gain, because the internet giant’s market share climbed by nearly the same amount and it now accounts for £1 out of every £4 spent on physical entertainment products.

As he puts the finishing touches to his new store, Putman is optimistic: “The market is definitely down but we are way ahead of the market. I’m really happy.” He said the chain had increased its movie sales despite the hefty downturn in the market.

The self-confessed vinyl nut, whose family owns Canadian toymaker and distributor Everest, has already re-opened 14 of the 28 HMV stores that closed after the retailer went into administration in December last year, taking the chain back to 114 outlets.

“I believe we can grow the chain,” he said. “A lot of high streets are challenged and struggling. The UK has got an amazing high street and we want to support that. There is something really special about it and when it’s gone, it’s gone.”

He said HMV had an advantage over Amazon because it offered an experience and was a part of local communities. “We hire people in communities and work with charities and we pay our tax. We do care. Amazon gives huge convenience but every time you get something amazing you are sacrificing something for that.”

“The world’s a scary place if there is just Amazon and ultimately we are all starting to realise that.”

The Birmingham store – underneath a carpark in a less salubrious part of the city centre shopping district – is aiming to offer something Amazon cannot. It has a stage to host bands and DJs and a screening room with space for 50 people alongside its music, film, books, band paraphernalia such as posters, T-shirts, mugs and technology such as headphones and turntables.

“We have more vinyl titles in stock in this store than sold in the whole of last year in the UK,” said Putman. “We need this to be a destination.”

The plan is to open a cafe, too – making it a destination entertainment store in the same way as Primark’s giant store down the road, which draws coachloads of shoppers with its cafes, beauty salon and barbers alongside cheap fashion.

Putman is also confident the UK chain can turn a profit in his first year. Moving out of HMV’s heavily loss-making Oxford Street store in London and agreeing rent cuts elsewhere have helped the bottom line, along with other savings.

“The market will contract but I don’t think HMV will. We will always beat the market,” he said.

“I’m really surprised how supportive customers and the public have been and how much people care and want us to succeed,” he added. “This is just the beginning; people will see more change coming in the next three to six months.”

The company has already achieved Putman’s aim of introducing more vinyl into its outlets. Each now stocks 3,000 to 7,000 albums, up from an average of just 500 before. Later this month, HMV will relaunch online, making it easier to search for and order items.

He is also giving more freedom to managers to stock goods they know will go down well locally. Stores are hosting local bands – and selling their CDs, vinyl or merchandise – and can pick up on regional trends, such as demand for reggae at the Birmingham Bullring store down the road.

Staff recommendations will also be an important part of the future. “We have got so much talent and knowledge in the teams. There are one million songs a month released on streaming services. How can anyone digest that? It’s up to us to say: ‘Here are the best 10 things which came out this week.’ We are trying to be the expert,” Putman said.