Catalyst Trusteeship, acting on behalf of one or a few debenture holders, sold Rs 204 crore worth of Zee Entertainment’s shares in a bulk deal on Monday. Zee shares were placed as collateral with various mutual funds (MFs) and lenders, which had taken loan-against-share (LAS) exposure to Essel Group firms.

On Monday, shares of Zee Entertainment corrected 9.6 per cent amid talks of one of the lenders invoking the pledged shares and selling those in the market. However, it couldn’t be ascertained which lender initiated this share sale, or if there were more than one lender involved.

According to market sources, SBI Mutual Fund was the major seller in the market along with a few other funds, which pruned their respective exposure. SBI MF didn’t officially confirm the transaction. As of March-end, SBI MF had exposure of around Rs 368 crore of debt exposures to Essel group firms. Responding to an e-mailed query, a company spokesperson said: “Essel Group confirms that the lenders who had not agreed to grant the extension have exited by selling the pledged shares of Zee Entertainment. The other lenders, who value the assets, have in-principally agreed to grant more time to the Group.”

Earlier this month, proceeds from promoters’ stake sale in Zee Entertainment were transferred to MFs and lenders. This transaction settled half the dues of most of the creditors. Over the last one month, the stock of Zee Entertainment has corrected 17.4 per cent. This sharp correction in shares would have also weighed on the equity cover that was offered against these loans. Essel Group has been seeking an extension from MFs and other lenders for its debt repayment beyond the September 30 deadline. Earlier, MFs and other lenders had entered into a ‘standstill’ agreement with Essel Group where the former wouldn’t sell the pledged shares of promoters to recover dues. The promoters were given time till September 30 to clear the outstanding dues. It was expected that most lenders would give an extension to Essel Group.

According to people in the know, Subhash Chandra, chairman of Essel Group, was also going to make a representation to Finance Minister Nirmala Sitharaman to assure of the Group’s debt repayment plans.Overall, the MF industry had Rs 5,000 crore–Rs 6,000 crore of debt exposure to Essel Group firms. Exchange disclosures showed that as of the June quarter, 64 per cent of the promoter holdings in Zee Entertainment were pledged.

The other listed companies of Essel Group where promoter pledging is on the higher side include Dish TV (94.47 per cent of promoter stake pledged), Siti Networks (90 per cent), Zee Learn (82.74 per cent), and Zee Media (93.54 per cent). 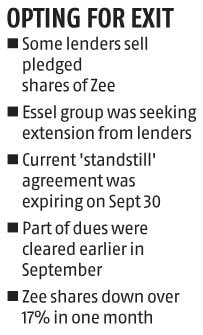