Riddle me this: What’s always at the same spot in San Luis Obispo, rarely seen, and slowly growing?

Every two years or so, SLO Museum of Art curator Ruta Saliklis brings out a few of the 162 pieces (and counting) from the permanent collection for the public to view.

“We see artists kind of broadly looking at the region [in the collection],” Saliklis said. “A lot of people don’t know about it. It’s nice to bring it out so they can see part of it.”

While the museum is always on the lookout for new pieces, not every item that’s offered up is accepted. The idea is to look for high quality art that’s by an artist from the area, by someone who passed through, or somehow inspired by the Central Coast. With the museum planning to raise a total of $15 million for a new building they hope to break ground for in 2019, Saliklis said this could be the last time the collection is displayed in the current building. 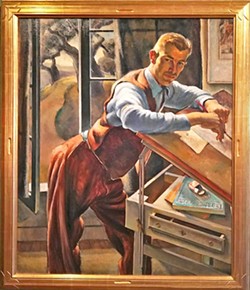 The collection was started by Arne Nybak, who served as the volunteer curator for 30 years up until 1999. Nybak would ask artists who displayed their work at the museum to donate a piece to the collection.

“That was great foresight on his part,” Saliklis said.

The oldest piece in the collection, Carl, is from 1939 and was painted by Phil Paradise, a friend of Nybak’s with whom he shared a printing studio in Cambria. The painting features a man leaning against a drawing board in an office with a window behind him exposing a view of those iconic rolling hills. Saliklis referred to Carl, which was recently featured at the Pasadena Museum of California Art, as one of the most important pieces in the collection.

Another piece, Gretchen by artist Helen Hunt Reid, has ties with the museum’s roots as well. This painting shows a woman in green with her hair in a sleek, low bun, thoughtfully staring at something. With a red art deco pattern behind her, Gretchen could even be in another art museum somewhere. The artist behind the piece lived on the Central Coast toward the end of her life in 1969. Though it’s unknown exactly who Gretchen is, Saliklis said the piece is known as the unofficial mascot of the collection, a sort of representation of the female art supporters behind the art association that later turned into a museum.

“She’s almost a composite of all the women who made the museum happen,” Saliklis said.

Of course, the collection isn’t lacking in contemporary work either. The 2000 piece Red Cow (a striking painting of a dark brown cow against an all-red background) was originally sold to a private buyer and then found its way back to artist Nancy Kolliner, who then donated it to the museum.

While the museum’s time in its current building may be limited, Saliklis said some of the artwork will likely move to an empty storefront downtown to create a sort of pop-up museum once construction begins. But for now, locals and tourists alike can still catch a glimpse of the permanent collection for a while longer.

“It’s an eclectic mix of things,” Saliklis said. “So there’s always something for everyone.” Δ