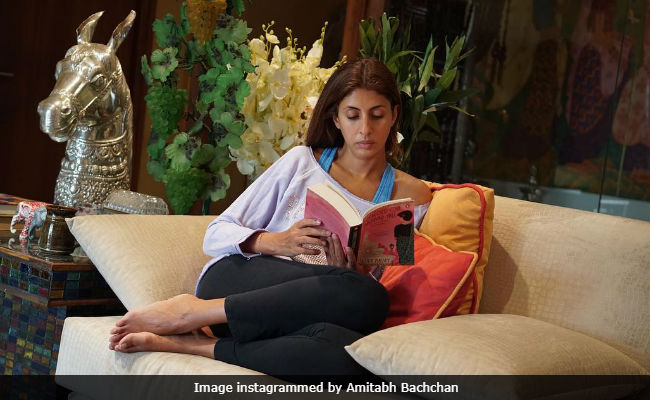 Amitabh Bachchan was interested in taking pictures and his muse was none other than his daughter Shweta Bachchan Nanda. Big B shared a picture of his daughter seated comfortably on a sofa and reading a book and he captioned it: “My efforts at photography, my daughter, who watches over as her father dines.” Clearly, Mr Bachchan was more interested in taking pictures than in his food. The 75-year-old actor has shared many photos of his daughter on social media saying ‘daughters are the best.’

Shweta is the elder of Amitabh Bachchan and Jaya Bachchan’s two children. Her younger brother is Abhsiehk, who is an actor, and is married to Aishwarya Rai Bachchan. Shweta is married to businessman Nikhil Nanda and they live in New Delhi with their two children Navya Naveli and Agastya. Shweta frequently visits Mumbai sometime accompanied by her children.

Here’s a picture of Shweta joining Amitabh Bachchan for his Sunday meet-and-greet session with his fans at Jalsa. This is when Big B “reserved the best wave and smile” for Shweta.

Amitabh Bachchan is quite busy with several projects these days. He is filming Yash Raj Films-backed <i<>Thugs Of Hindostan, co-starring Aamir Khan, Katrina Kaif and Fatima Sana Shaikh. The film is directed by Vijay Krishna Acharya.

<i<>Amitabh Bachchan will also stars in Brahmastra, which is directed by Ayan Mukherji and produced by Karan Johar. The trilogy also features Ranbir Kapoor and Alia Bhatt.

He is also awaiting the release of 102 Not Out, co-starring Rishi Kapoor.